Upsilon Sigma Phi Fraternity (ΥΣΦ) was founded in November of 1919. At that time a small group of men gathered frequently in the evening to assist each other in studying for their chosen profession.

At that time a small group of men, attending Philadelphia College of Pharmacy, gathered frequently in the evening to further acquaint themselves and assist each other in studying for their chosen profession.

They originally named this organization the U.S.P. Society. So great was their purpose and subsequent success, that soon after even more students were eager to attend these meetings. Soon thereafter the numbers had increased to the point that this group, with the help of G.A. Kelly and E.J. Cook, was formally organized into a fraternity they named Upsilon Sigma Phi.

The charter membership for the fraternities first year was twenty-one and that number would more than double by the end of the second year with membership increasing to fifty-three. Six short successful years later in May of 1925 the fraternity was granted its charter under the laws of the Commonwealth of Pennsylvania. Membership by this time had exceeded the century mark.

After a very active period during the thirties the fraternity found itself near extinction during the mid forties after proudly sending many of its members off to war. If not for the hard work of six members who were returning to school after serving their country the fraternity would not have survived. 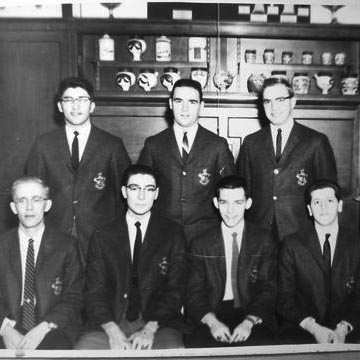 Upsilon Sigma Phi has a long tradition of maintaining a chapter house in southwest Philadelphia close to the college. The fraternity has had many previous addresses including what was described at the time as a beautiful house located at 1010 S. 46th street. Unfortunately this house was let go by the members due to the Second World War. After the war the fraternity struggled to find a permanent residence until 1961 when, with the assistance of alumnus Armand Angelucci, the current property was purchased. Since that time the “house” as it has become known has provided the brothers with a home away from home for their college years and solidified Upsilon Sigma Phi place as a permanent fixture in the community. 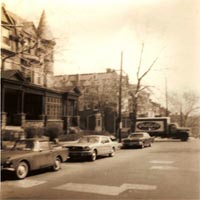 The Rise of the Phoenix

By August of 2007, the fraternity found itself struggling to survive when the chapter house was condemned by the City of Philadelphia, forcing active brothers from their home and threatening the end of ΥΣΦ. Determined to prevent what seemed to be the inevitable collapse of the organization, the brothers of ΥΣΦ banded together, launching a massive call to action. In short time, the brothers charged forward, reaching out for donations and pledges of support from past members.

In February of 2008, a small dedicated group of alumni met with the active brothers at the old Track N’ Turf to determine a course of action that would save the organization. In addition to a new roof and a complete re-wiring, it was soon decided that only a complete gutting and reconstruction of the interior of the house would save the property.

In April of 2008, unwilling to let the organization fall, the active brothers and newly founded Alumni Association pushed forward with a massive fund raising and remodeling effort of the chapter house. Brothers and Alumni, disconnected for years, found themselves together again, working to rebuild their legacy. Through their hard work and commitment to loyalty, the members of ΥΣΦ pulled the organization from the ashes, paving the way for future growth and prosperity.

Upsilon Sigma Phi is currently the oldest continuously operating fraternity on campus, producing 1000+ alumni who have gone on to be successful health care professionals, scientists, educators and administrators, industry executives and business owners.

ΥΣΦ celebrated the reconstruction by giving out slate tiles constructed from the chapter house roof.